Cost of ownership: Classic vs Modern

"I'd like to own a classic but I couldn't possibly afford the cost to maintain one; I own a modern fiberglass trawler instead."  How many times have I heard that or something similar?  So many that I finally had to look at the numbers.  Were my classic boating expenses that far out of line with reality?  Could I be having just as much fun for a lot less money by simply buying a new, modern boat? Think of it -- no more varnishing.  With the time and money saved I could take up golf!

I began thinking seriously about the cost of ownership when I began to prepare a seminar addressing the practical aspects of owning a classic power cruiser.  I've presented the seminar at the last three Port Townsend Wooden Boat Festivals, and the core of that talk is about financial and time commitments.  Initially I planned to just add up all my past costs of owning Compadre, and perhaps divide by the number of years I've owned her, to give folks an idea of the annual cost of ownership.  Of course, those were big numbers, as the owner of any boat knows.  Boat ownership is not a rational undertaking -- no one would own a cruising boat if they simply looked at the numbers.  We all know there is a huge emotional element in boat ownership, and most owners would rather not know what it really costs.  But I had a seminar to do, so I plunged ahead!

I quickly realized that the important question was not what it costs to own a classic boat, but how that cost compared to owning other types of boats.  How much more expensive was owning Compadre compared to what my friends were paying for new, or nearly new, cruisers of a comparable size?  In other words, how much more was I paying to enjoy the benefits of owning a classic?

In doing this comparison, we must first consider a few basic facts: 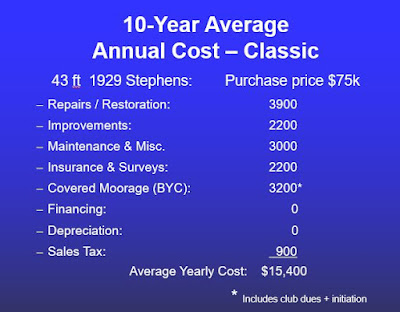 Next let's look at the annual cost of owning a modern boat -- in this case a 31-ft Ranger Tug.  These boats are abundant here in the Northwest, so they clearly are within the means of many boat owners.  I chose not to consider a brand new boat, but rather a nearly new 2014 model that I saw advertised recently, reasoning that many purchasers would prefer this because someone else has already outfitted it and paid a bit of depreciation.

My estimate of annual ownership costs over a 10 year period for this modern boat are as follows: 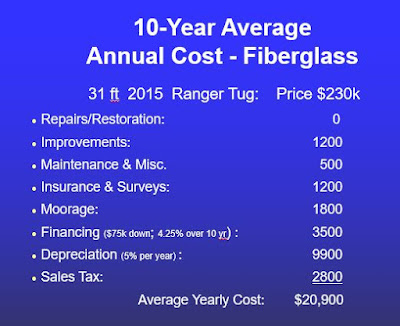 Notice that I didn't include the purchase price for either the classic or modern boat in the annual costs because one gets that money back when the boat is sold, less any depreciation during ownership. (*Also note that the yacht club moorage numbers include pro-rated dues and initiation fees -- Truly a good deal).

Of course, no two boats will have the same expenses over time, and different owners will incur somewhat different expenses over any given period of ownership (after all, "your mileage may vary").  And you may choose to argue with some of these numbers based on your own experience.

Nevertheless I think the message is clear:  All boats are expensive.  With modern boats you pay a lot up front and can expect relatively few expenses for repair and maintenance.  Here depreciation. financing, and sales tax are major costs.  With a classic, your initial expenditure is small but you have substantial future maintenance costs.  Interestingly, you pay about the same amount in the end in both cases; your expenses just come at different times and for different reasons.  As they say... "You pay now or you pay later."

As always, I'd be interested in hearing your comments.