Messages from the past: In this case, a rear-deck repair.

In many respects owning a classic is no different from owning any other boat.  As you know by now, that is one of the main themes of this blog.  With all boats there are things that might have been done better, either by the builder or by folks who came along later.  We are fortunate that Compadre was well designed and built to a very high standard by Stephens Bros.  But because least 13 owners came before us, there has been ample opportunity for folks to mess things up.  Luckily we have found only a few problems that could be attributed to poor repairs or restoration.

One problem we had known about for some time was around the hatch on the back deck -- it moved up and down when you stepped on it.  Not supposed to happen.  As 2016 came to a close we could put it off no longer.  It was time to pull up the teak and deal with it.

Compadre's teak decks, and some of the underlying beams, were replaced about 15 years ago and generally are in good condition.  Beneath the half-inch teak boards is 3/4-inch marine plywood resting on fir beams.  Around the hatch in the back deck, water had leaked inside the hatch opening, and then seeped between the teak and the underlying plywood, causing an area of rot extending a foot or so in all directions.  The teak was fine, but the plywood and underlying beams were rotted and needed to be replaced.  This was going to be a big job, but one I felt I could do myself.  The first step was to pull up a few teak deck planks to investigate.

Fortunately the teak was just screwed down, and not glued.  With a little care the screws and bungs (wood plugs covering the screws) could be removed and each deck board came free.  This was significant because the teak could be cleaned up and reinstalled, thus eliminating the cost of new teak decking and the time required to fit each piece.  So far, so good.

Between the teak and the underlying plywood substrate was an elastic, waterproof membrane.  This is a product for the roofing trade called Ice and Water Shield, and was meant to keep any water that leaked through the teak deck seams (not uncommon on teak decks) from coming in contact with the plywood.  This is an excellent product and sells for about $130 per roll, so whoever did this deck installation did not skimp on materials.  I promptly bought a roll to use on my repair job.

So with all this fancy waterproofing, why did we have a rot problem?  In spite of using good materials, the installer forgot one important thing:  Flashing around the hatch opening.   The teak and plywood simply ended at the hatch opening, with the raw edges covered by some teak trim.  A little rubber seam compound between the trim and the teak deck boards was the only thing keeping the water out.  I'm sure it didn't take long for rain water to begin to find it's way behind the seam compound and back under the fancy waterproof membrane.  Eventually an area about 1-foot wide on each side of the hatch was saturated by water and rot soon followed.  Some simple flashing around the opening, as is typically done around house windows, would keep this from happening again, but first we had some work to do.

Once I had the plywood trimmed back to sound wood, it was time to confront the deck beams and rectangular hatch framing where they contacted the rotted plywood.  They would have to come out as well.  Measuring carefully so I could rebuild the framing later, I cut out all the bad wood, with a taper on the two lateral beams to allow me to scarf in new replacement pieces.

Scarfing in new vertical-grain Douglas fir deck beams was time consuming but not difficult.  These were through-bolted to the stubs of the existing beams and glued with epoxy.  The new hatch framing then followed, held in place with new silicon bronze screws.

With the framing in place it was time for new 3/4-inch marine plywood.  It would be in two pieces, and in order to be sure it would bend enough to conform to the curvature of the deck, I made a series of shallow cuts (kerfs) on the underside of the plywood with a circular saw.  This worked well, and the plywood was fitted and screwed down without difficulty.

The image below shows the new 3/4-inch plywood decking, screwed in place and resting on the fir hatch frame.  The next step was to ensure that this rot problem would not happen again.  Which means keeping water out.  Which means flashing.  I decided on a two-part system consisting of self-adhering flexible flashing, overlain by sheet metal.  I started with a "butterfly" piece at each corner, then added long strips from corner to corner.


I was confident that the self-adhering flexible flashing would prevent any water from contacting the wood, but it is not durable enough to stand on it's own in a high-traffic area such as the deck hatch.  It would need some protection, and for that I chose metal roof flashing.  This is sheet steel, so there is some risk of rust, but I planned to paint any exposed metal with marine enamel for extra protection.


Next came the new waterproof membrane.  This has a peel-off adhesive backing, and firmly attaches to the old membrane around the edges of my patch, and to the new decking and flashing.

Replacing the teak boards was a bit like doing a jig-saw puzzle, making sure each piece went back where it was installed originally.  With two boxes of bronze screws, and nearly 200 3/8-inch diameter teak bungs, the teak went on with few problems.

The joints between the teak deck boards are filled with a special caulking made just for that purpose.  It's black, comes in tubes, and can be very messy.  A little masking tape (OK, a lot of masking tape) helps control the mess.  After the caulk sets, the tape is removed, and there is little left to do. 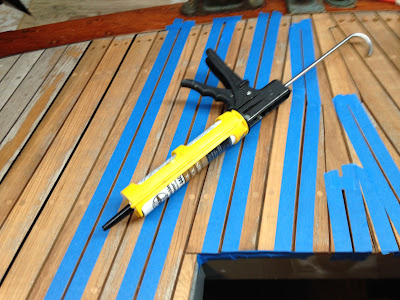 A thin strip of teak trim around the edge of the hatch covers most of the metal flashing.  In spite of all the rot in the fir deck beams and plywood, the original teak trim was still good.  Amazing stuff, that teak.

Overall, this was a very rewarding project.  Things went more or less according to plan, although the extent of the rot was greater than I expected.  I did not keep track of my hours, but the work was done as time allowed over a two-month period.  If I had to guess I'd say I spent about 2-3 man-weeks on the job.  And the out-of-pocket cost was a few hundred dollars in materials.  Much cheaper than going to the boatyard!
Posted by Rick Randall at 5:49 PM No comments: